Dark matter may be wrong, but it isn't unscientific 🌌

The theory of dark matter began around a century ago. It is a basic law of physics that when an object orbits another, the further away it is, the slower it has to move. The gravitational force is weaker, so the object can’t go as fast as closer ones without flying out of orbit. Bizarrely though, several astronomers observed that large-scale objects like stars and galaxies simply don’t care about this law; those which are far out from their orbital centre move at roughly the same speed as those close to it. Their conclusions were that there must be a lot of extra mass in galaxies that, for some reason, we can’t see.

The idea that 85% of matter is borderline undetectable is certainly strange. It may yet be wrong—but to some, it is guilty of a larger crime. Isn’t this idea, they ask, backwards from how science should work? We’re supposed to make hypotheses which explain available evidence; it’s not valid to ignore or invent evidence to defend a hypothesis. Yet here we’ve just invented evidence to fix a problem in our theory of gravity. 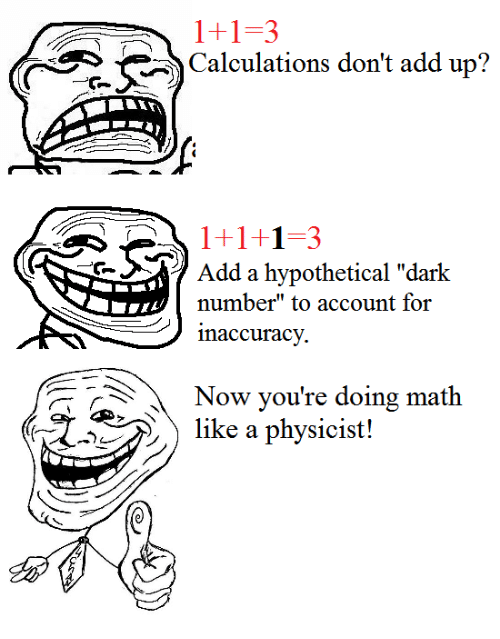 Let’s use an analogy for a moment. Suppose you’re a scientist of antiquity and you’ve just finished building the very first microscope. However, when you look through it, you see something totally unexpected: the blurry visage of a microbe.

How should you respond to this? I’m sure we agree the “correct” way is this:

What if, instead, we followed this reasoning:

This looks like the same kind of thing as dark matter: we’ve invented the brokenness to avoid changing our belief about microbes.

The thing is, this “inventing” of evidence isn’t fundamentally wrong. In fact, it happens successfully all the time. Have you ever seen weird output data or heard an unsettling sound from a machine, thought “that can’t be right”, and then found a problem? Then you’ve used this reasoning.

When you look down the microscope, you’ll see the same thing as anyone else, in the sense that the same image will be shown to your eyes. But what you conceptually “see” depends entirely on which beliefs or theories you hold to be likely. Is it a blemish or a microbe? Depends on how clear the image is, how confident I am in my microscope, whether it looks like broken lenses I’ve seen before, etc.

All that novel evidence does is introduce a contradiction in our understanding. It doesn’t come with instructions about which of our beliefs needs to change to resolve it. So, when we learn from evidence, we are always making a subjective choice about which belief it applies to. Evidence and theory aren’t separate but both proceed from each other, like the chicken and the egg.

When the LIGO sensor he worked at first detected gravitational waves, Rana Adhikari was so sure it was a dud he dismissed it without even looking at the data. It was only after weeks of ruling out what he thought were more likely explanations (malfunction, sabotage) and building other beliefs that he accepted the data as evidence for gravitational waves.

So yes, galaxies spinning too fast could be evidence that our theory of gravity is wrong. But it could just as well be direct evidence of dark matter. There isn’t much conceptually different between looking directly through a microscope and indirectly through the chain of telescopes, interpreting of images, computer calculations, and theory of gravity it takes to posit that dark matter exists. When we “see” both the mass of a galaxy and its rotation speed, we can combine both to “see” dark matter. We form a lens from our supporting beliefs.

The other interpretation, that gravity is wrong, was never forgotten and has developed into various hypotheses like modified Newtonian dynamics (MOND). The prevailing opinion seems to be that they just don’t fit to the same level that dark matter does. (Though it seems contentious.1 2)

Some explanations of science draw a sharp line between theory and evidence. This is attractive, but overly simplistic; really, they are deeply intertwined. While we have ideas of other explanations, there’s a lot of compelling evidence for dark matter being our best one. It’s bizarre, but no one said the universe had to make sense.